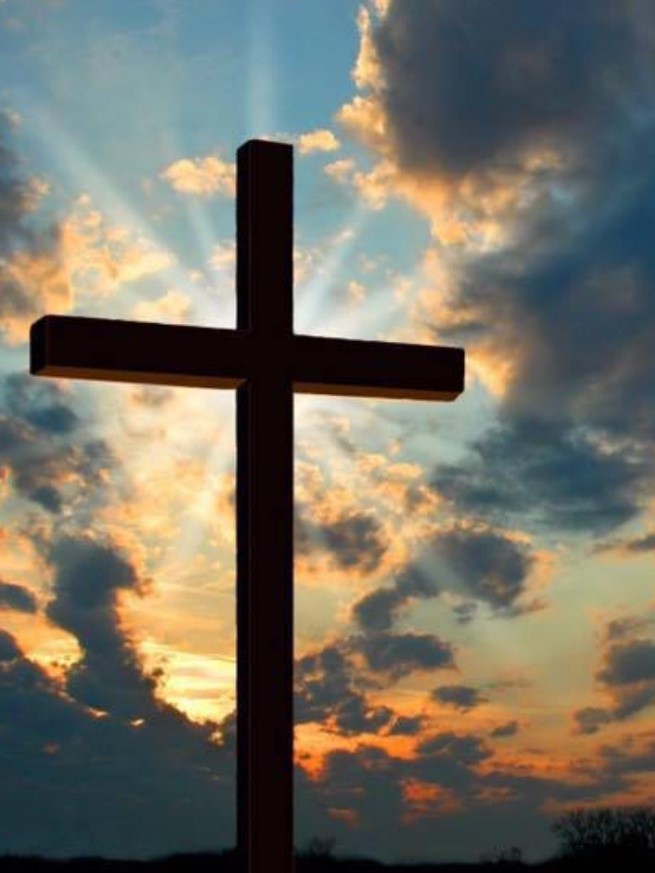 About us and the Church Building

St. Aidan’s Presbyterian Church was opened in 1901, built with the support of a largely Scottish congregation.   The construction is of Accrington brick and Westmorland slate with a spire and unusual flying buttresses.   However the reason for the building’s later Grade 2 listing are the fine stained glass windows.

In 1971 St. Aidan’s merged with Grosvenor Presbyterian Church (Withington) becoming Grosvenor St. Aidan’s. This was soon followed by the formation of the United Reformed Church,  when the Presbyterian Church of England and the Congregational Church in England and Wales united, later being joined by the Churches of Christ and the Congregational Union of Scotland. However our members come from all sorts of backgrounds, Christian or not. In 1992 the church sanctuary was badly burned in an arson attack and extensive restoration was required and the opportunity was taken for some modernisation.  In 2009 we changed our name to Didsbury United Reformed Church.  Today’s challenge is to combine the best of our traditions and fine building with the needs of worship and witness in the 21st Century.

Communion is celebrated at the first service of each month as well as on special occasions and all are welcome.

In Art Nouveau style, the windows depict plants and flowers and other Christian symbols. The first minister of this church, the Revd. Arthur Taylor, was interested in flowers and suggested the theme.

The artist, Walter Pearce, was a leading designer in stained glass in Manchester at the turn of the 20th century and he worked on these windows between 1901 and 1913. Further examples of his work can be seen in the Blackburn Park (Conservation Area) houses and at Emmanuel Church on Barlow Moor Road. Until recently, there was little interest in stained glass, but an extra-mural course at Manchester University and a stained glass survey undertaken by the Victorian Society reflect an increasing appreciation. Yet back in 1957, Walter Pearce’s east window was taken out and replaced by a window telling the story of the events on the road to Emmaus. The new window was made at the Whitefriars Stained Glass Studios in Wealdstone and was given by Fadlo Hourani, who came to England from Lebanon in 1890 and made his home in Manchester. The window is in memory of Fadlo’s wife, Sumaya, and the inscription in Arabic was written by her brother.

Meanwhile, the original window lay in pieces in the church cellar. It showed St. Aidan with corn sheaves and grapes, symbolising the bread and wine of the Holy Communion, and St. Columba with pomegranates and figs, symbols of unity, resurrection and fertility. Fortunately a painting of the original window made by a member of the congregation prior to its removal had been preserved. This proved vital in reconstructing part of the window when, in 1982, Andrew Semple offered to pay for its installation at the west end in memory of his father, Hugh Semple, Professor of Latin and Dean of the Faculty of Theology at the University of Manchester, and the Session Clerk of this congregation from 1947 until 1971. The restoration work was carried out by the Manchester stained glass company of Lightfoots who pieced together fragments to make a beautiful new two-light window.

There are also a number of Flower Windows in the church :- 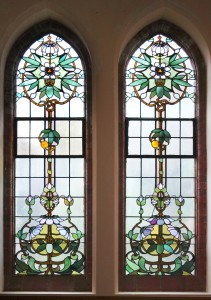 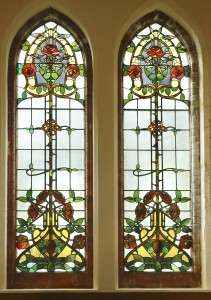 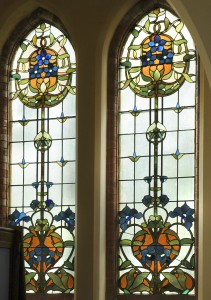 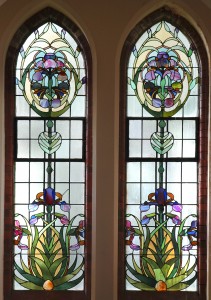 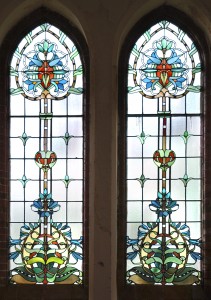 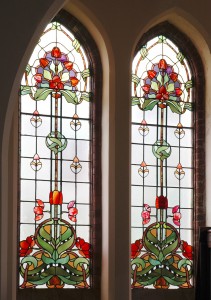 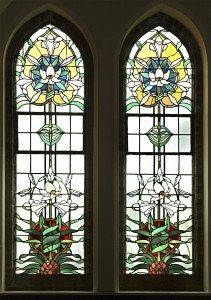 We hope you will visit the church and see the windows up close.