A Service for Passion Sunday 2021 by Mrs. Anne Wilde 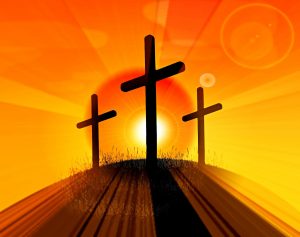 Loving God,
We are afraid of your love, your intimacy, we are used to being judged, but we are not used to being
loved, totally.
We would rather hold on to our self-hatred than believe in your total acceptance of us.
Give us the courage to let go and embrace you; may we learn how to want you to touch us, to know us,
that we in our turn may love generously
Those who cannot believe they are loved.
Take time to allow God to touch you then hear his words of love.
“Your sins are forgiven, go in peace, and walk with me again.” Amen.

Who has believed our message and to whom has the arm of the LORD been revealed? He grew up before him like a tender shoot, and like a root out of dry ground. He had no beauty or majesty to attract us to him, nothing in his appearance that we should desire him. He was despised and rejected by mankind, a man of suffering, and familiar with pain. Like one from whom people hide their faces he was despised, and we held him in low esteem. Surely he took up our pain and bore our suffering, yet we considered him punished by God, stricken by him, and afflicted. But he was pierced for our transgressions, he was crushed for our iniquities; the punishment that brought us peace was on him, and by his wounds we are healed. We all, like sheep, have gone astray, each of us has turned to our own way; and the LORD has laid on him the iniquity of us all.

The mother of Zebedee’s sons came to Jesus with her sons and, kneeling down, asked a favour of him.
“What is it you want?” he asked. She said,
“Grant that one of these two sons of mine may sit at your right and the other at your left in your kingdom.”
“You don’t know what you are asking,” Jesus said to them.
“Can you drink the cup I am going to drink?”
“We can,” they answered. Jesus said to them,
“You will indeed drink from my cup, but to sit at my right or left is not for me to grant. These places belong to those for whom they have been prepared by my Father.”
When the ten heard about this, they were indignant with the two brothers. Jesus called them together and said,
“You know that the rulers of the Gentiles lord it over them, and their high officials exercise authority over them. Not so with you. Instead, whoever wants to become great among you must be your servant, and whoever wants to be first must be your slave–just as the Son of Man did not come to be served, but to serve, and to give his life as a ransom for many.”

We were sheltering from the mid-day heat before continuing our journey to Jerusalem.
I watched Jesus as he snoozed in the shade, and thought how tired he was looking, weary, haggard. My mind wandered back to the day my sister introduced her first-born, my first nephew, to me. He was so beautiful, small and new, and the world was his oyster. I became his substitute mum when Mary was pre-occupied or busy. Mary and I would talk then about the meaning of his birth, what his future would be, what God’s purpose for him might be, as we watched him grow. We had no clue but we tried to make sense of it all.
In time I married Zebedee, and left Nazareth. Later we would share happy family times at the seaside, her boys and mine having fun splashing in the lake. Later still, Zebedee taught them all to catch fish, mend the nets, and sail the boats. Over the years we saw our babies, grow into children, then into young men, all of them becoming capable fishermen.
Now those seemed like far away days, in another, simpler life, when we thought we had the measure of Jesus, the beautiful boy with a rippling, toned body and a golden future. He was going to be the A-list celebrity to end all A-list celebrities.

It was difficult now, thinking he was the same person – this man with his strained jaw, furrowed brow, hunched shoulders and distant far- away look. There was something ‘other worldly’ and ‘set apart’ about him. I felt as if I didn’t know him at all, there was something about him that frightened me. He was like an ice-berg, just a small piece visible and much, much more under the surface. That didn’t stop me loving him like one of my own though.
Mary couldn’t travel with us, so I’d became his substitute mum once again. James, John, and Jesus, I made no distinction, they were all my boys and I was fiercely proud of them all. I had no doubt, that despite the fact that he was no longer the beautiful shining boy of his youth, somehow the future of humanity, my sons’ future and mine too were all wrapped up in my nephew. And my family would be privileged because of who we were in relation to him.

Jesus talked a lot about what would happen when God’s Kingdom became established on earth, we knew then God was going to give Jesus, rule over all things. Jesus said that when God’s Kingdom came, he (Jesus) would sit on his glorious throne, and he promised “you who have followed me will also sit on twelve thrones, judging the twelve tribes of Israel.”
It would be a wonderful time, we would become the Royal family, people from all around the world would flock to see us. They would want to know what we thought, what we wore, how we did our hair.
We’d be invited to the best parties, everybody would want us as their friends. People would model their lives on us. It was all so exciting. I thought ‘Jesus needs a hug and some encouragement. He needs to be reminded how fantastic our future will be!’

I got up quietly and moved to Jesus without disturbing him. I knelt down, stroked his hair, expressed deep maternal love. He stirred, opened his eyes and smiled at me.
“All will be well, wonderful when God’s Kingdom comes. Don’t worry, God won’t fail us.”
“What do you want, aunt?”
“When Kingdom comes,” I heard myself saying “you’ll need people around you can trust, depend on. Men exercising your authority well, your substitutes when you are preoccupied or busy. Appoint James and John as next in command – when you are King your cousins will be Princes after all.”
Beckoning my sons with enthusiasm I didn’t hear the deep, heart rending sigh from the depths of Jesus’ being.

That day I now realise, I had no clue who he really was, what he was doing or why. Although I had been the closest woman to him after his mother, he was a total stranger.
“Can you drink the cup I am about to drink?” he asked us. Then, he said he had not come to be served but to serve and give his life as a ransom. I had absolutely no idea what he was talking about, but I did feel the tension coming from him, and the general upset from the others resulting from this conversation. I decide to keep my distance from them all after that, stupid, stupid woman!

With the passage of time. I grew frightened for my darling boy. What had he meant by drinking a cup we could not drink from? He seemed weighed down by sorrow. I feared for his sanity, as if he and deep, unexpressed grief walked hand in hand. He was my ‘Man of sorrows’. Mary would be distraught if she could see him!
Some of the others began keeping their distance too, they couldn’t bear to see him so miserable either.
That once smiling, happy face which lit up any room in seconds, seemed distorted and dreary.

Arriving in Jerusalem the weight of opinion soon swung against him. The authorities hated him with passion. When he was arrested it was obvious that many people thought he deserved everything that was coming to him. Watching him dying, his face, disfigured by pain, torture and blood, seemed to change, but I couldn’t tell if it was because my eyes were blurred by my tears or if it was my imagination.
His face seemed to disappear and I thought it was Mary’s face that looked down at me, they looked so alike. Then, something incredible happened I realised it was my face I was looking at. I was looking at myself! It was me twisted and in spasm on the cross. This is what I deserve, where my foolish ambitions, my total selfishness and pride have brought me! It is me causing Jesus such pain!
God forgive me!

I heard Isaiah’s words: “he was pierced for our transgressions, he was crushed for our iniquities; the punishment that brought us peace was upon him, and by his wounds we are healed.”
My vision cleared and once more I saw Jesus’ face. I’d look at my nephew and saw God in Jesus, choosing to die in my place.
By this manner of his dying, he had chosen to stand in my place, taking the punishment my selfish, proud nature deserved and he has chosen to stand in YOUR place too, taking your punishment for the things that ruin your relationship with God. Could there ever be such a servant?
I’d often taken the place of his mother, now he was taking my place, a substitute for me, for Mary, for my boys, for all of us, for YOU. And Jesus’ words about ‘drinking the cup we could not drink’ began to make sense at last.

Bring your best to their worst,
Bring your peace to their pain,
God of love, heal your people.
That broken folk may know they will be made whole….

Bring your best to their worst,
Bring your peace to their pain,
God of love, heal your people.
That those who fear may never walk alone…

Bring your best to their worst,
Bring your peace to their pain,
God of love, heal your people.
That those who doubt may find a deeper faith…

Bring your best to their worst,
Bring your peace to their pain,
God of love, heal your people.
That those near death may see the light of day.

Bring your best to my worst,
Bring your peace to my pain,
God of love, heal your people.
(Take some time to be still before God)

Our Father, who art in heaven, hallowed be thy name, thy kingdom come, thy will be done on earth as it is in heaven. Give us this day our daily bread and forgive us our trespasses as we forgive those who trespass against us and lead us not into temptation but deliver us from evil. For thine is the kingdom, the power and the glory for ever and ever. Amen